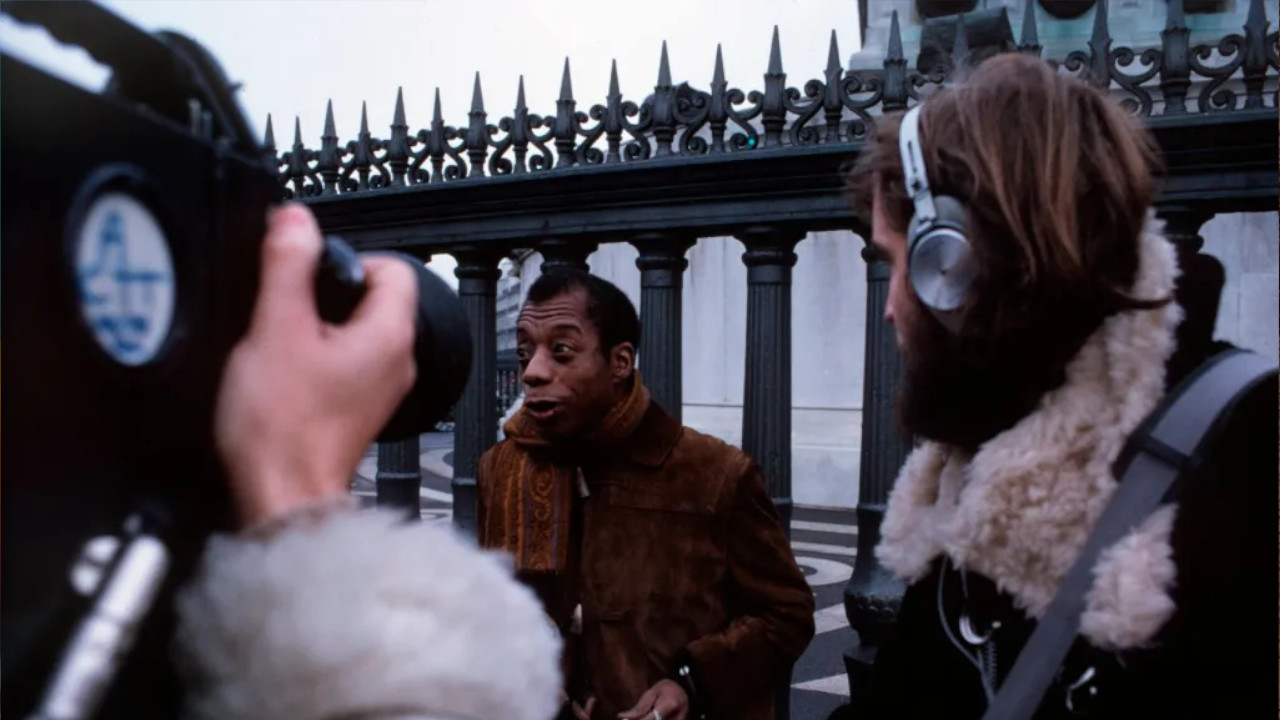 The failure of Meeting the Man: James Baldwin in Paris has found a new purpose beyond Terrence Dixon’s original artistic intention. In an ironic bid to give him a platform, the righteous white filmmaker pins a black man to the gates of the Bastille. If not for Baldwin’s remarkable ability with words, for his character in general, this film would be condemned to the shadows of an archive, as a horror of ignorant filmmaking. Because of Baldwin, it should be celebrated. Meeting the Man is a process, in which we witness the process of revolution, of a director losing control of his project, and the interviewee taking control.

Often, we do not view directors or filmmakers as subjects of their own films. David Attenborough documentaries are typified by an omniscient narrator, making sense of a strange world before us. This appears to be Dixon’s approach, but Baldwin pulls him onto the stage.

We might pick apart certain parts of his character. His RP English (Received Pronunciation/BBC English) at the time was a standard for broadcasting. It is certainly noticeable in contrast to Baldwin’s accent and to us in the contemporary moment. As Lars Andersson and Peter Trudgill argue, this way of speaking represents “education, wealth, power, status, and prestige”, reinforced by its associations with Oxbridge, public schools, and the British Broadcasting Association. As the gold standard of newscasting, of being an ‘impartial’ broadcaster, associations implicitly award speakers a domineering objectivity. In comparison, Dixon comes across as a privileged figure. Meeting the Man elevates to a meta-struggle, of small narratives versus the grand, fixed grand narrative of privileged filmmakers. The fight is against societal structures and racial power relations, which is revealed in a slow process beneath the Bastille.

This is the location of Baldwin’s revolutionary moment. The prison, stormed by the French revolutionaries, an event celebrated every 14th July in France – fête nationale française. The monument symbolises liberty for the nation, but Dixon has Baldwin pressed to the bars. The resulting footage is crammed, uncomfortable, and proceeds to unravel the ego project. Dixon invades the frame, often obscuring completely the film’s subject. As he bends down to talk at Baldwin, it is reminiscent of a “grade school teacher chastising an ornery school pupil”. Baldwin utilises this difficult situation to lay out his first lesson for Dixon and the viewer. He too is trying to tear down a prison not yet in the “European imagination”. Dixon and “all of you” – implicating the viewer – are his warden.

Knowing an issue does not equate to understanding, which is most likely born from lived experience, and this assumption is what can transform the sympathiser to the cause into the warden. At no point do the filmmakers attempt to listen: they think Baldwin has escaped; they offer leading questions; they pigeonhole him, not in the least as a “revolutionary writer”. They act as enlightened mediators (or translators), working to appeal to their white audience. And for this very reason they warden a prison beyond their knowledge.

The power of expression should be theirs, Baldwin’s or the students that follow him. Yet, they find themselves at the will of Dixon’s artistic vision. Lived experience is the important difference between them. “For no other reason, for no other reason, he [one of the students] could be dead in the morning,” Baldwin tells Dixon. It is because they have lived without the privilege of security, in a life constantly defined by fear and survival, that makes Dixon and Co. ineffective speakers on their behalf.

This is an important point to remember as we go into Pride Month. As an openly gay man, known for writing Giovanni’s Room, Baldwin’s words may equally express the dangers that come with sexuality as well as race. Many claim to be sympathetic to the cause or/and have never seen homophobia, and assume not much needs to be done. But these are the exact risks of ‘knowledge = understanding’. One can choose when to be sympathetic, as easy as selecting a David Attenborough documentary to feel bad for the environment. Being gay and/or black, on the other hand, is not so much something one can tune out. The fear is always present.

I have seen this film so many times for my assignment. Each viewing imbued Baldwin’s words with slightly more affective power, taken in by his careful enunciation and unblinking eyes. My relationship with this film is of love and dislike. I love it for Baldwin, what he made of an uncomfortable situation. I hate its assumptions, which as a queer person, drives me insane.

I am only queer though, and this is my only gateway to some understanding. My family is from a white/mixed background, but I still feel incredibly privileged as I speak on this issue. I shall never know what it is like to be a black person now, in the twentieth century, or even before then. What I have taken from this film is the importance of minority voices and listening to them.

You can watch Meeting The Man: James Baldwin In Paris on MUBI: